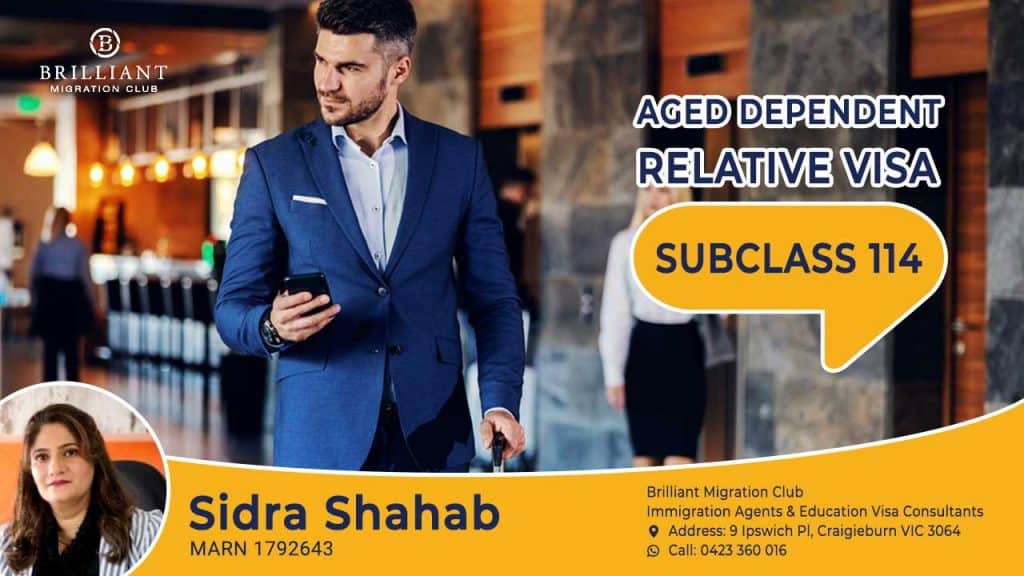 The
aged dependent relative Visa Subclass 114 visa allows the applicant to visit and stay in Australia indefinitely, subject to the condition that they have a close relative as a sponsor. The applicant is free to live in Australia as a permanent resident after visa issuance and free to work or even study as per his/her will. However, before applying, a couple of factors must be kept well in account and conditions that must be met. For a person to fully qualify for this visa, the following tidbits must be satisfied:

The Subclass 114 Offshore visa is only valid for applicants who are:

For a person to be eligible for Subclass 114, he/she must:

For the sponsor to stay eligible, he/she must:

Apart from that, the sponsor must also sign an Assurance of Support document with a mandatory bond paid. This is a necessary formality and a legal agreement made with the Australian government to help the applicant live in the country.

Following are the relationships that fall under MoFU

Step equivalents of the aforementioned relatives are also eligible to sponsor the applicant.

Evidence Needed to prove the relationship.

Sometimes, some of the documents are lost or damaged due to unfortunate events, and therefore cannot be recovered immediately. So just in case the applicant is caught in a desperate position regarding the documents, he/she can use the following documents as an alternative:

Since none of the aforementioned documents concisely proves the sponsor-applicant relationship on its own, at least 2 or 3 documents should be provided together, each supporting the other one to prove the relation.

Apart from sponsor-applicant MoFU proofs, the applicant must prove that:

As the Visa requires the applicant to be completely dependent on the sponsor, he/she cannot have a spouse or be in a de facto relationship. He/she cannot be eligible if found to be in any of the aforementioned relationships. To prove the validity of the claim, the following documents must be provided:

If none or any of the aforementioned documents is available at the moment e.g, the applicant has never been married or lost the documents due to any tragic event, alternative documents that prove the relationship status can be provided. Those include:

The applicant must prove that he/she has been dependent on the sponsor for basic financial needs for quite a while and will continue to be dependent in the future. To prove the claim, the following documents must be provided with the application:

It also plays a huge role in the issuance of Subclass 114 Visa. As stated, the applicant must have reasonable evidence and an argument to support the “dependability” claim. Therefore, the judgment will be made based on the following factors:

The applicant must have been dependent on the sponsor for a reasonable period, which is at least 3-years before the date of the application. However, this condition can be softened subject to specific conditions.

For example, if the sponsor has been sending money to both parents/partners in the past, however, one of them has been indirectly receiving it, whilst the direct receiver has passed away, the evidence must be provided to prove dependency. In such cases, a death certificate of the deceased partner (who has been directly receiving funds from a sponsor) can be used.

To stay eligible for the Visa, the applicant must be dependent on the sponsor at the time of application as well as the time of issuance of the visa. The concerned department can also ask for additional documents amidst the process if they have any suspicions.

What is a settled Sponsor for Aged Dependent Relative Visa Subclass 114?

The sponsor is considered a permanent/settled resident of Australia if he/she:

The sponsor can use the following documents to prove his/her residency in Australia if he/she has been accumulated outside the country for more than four months in the 2-years duration and is residing in Australia at the time of application:

If the sponsor has been absent for more than 4-months from Australia 2 years before application and is also accumulated outside Australia at the time of application, the following documents should be provided as evidence:

Unlike other visas, the processing time of age-dependent subclass 114 is unpredictable and long. As it works on a first-come-first-get methodology, the applicants applying late will be kept in a queue, subject to new places coming available. Moreover, it also depends upon certain factors like:

For further information about the Age-Dependent Subclass 114 visa, kindly visit the official website of the Australian Department of Home Affairs. If you are an applicant, talk to your concerned agent before and during the application process for a smooth and less stressful experience.

All About Partner Visa