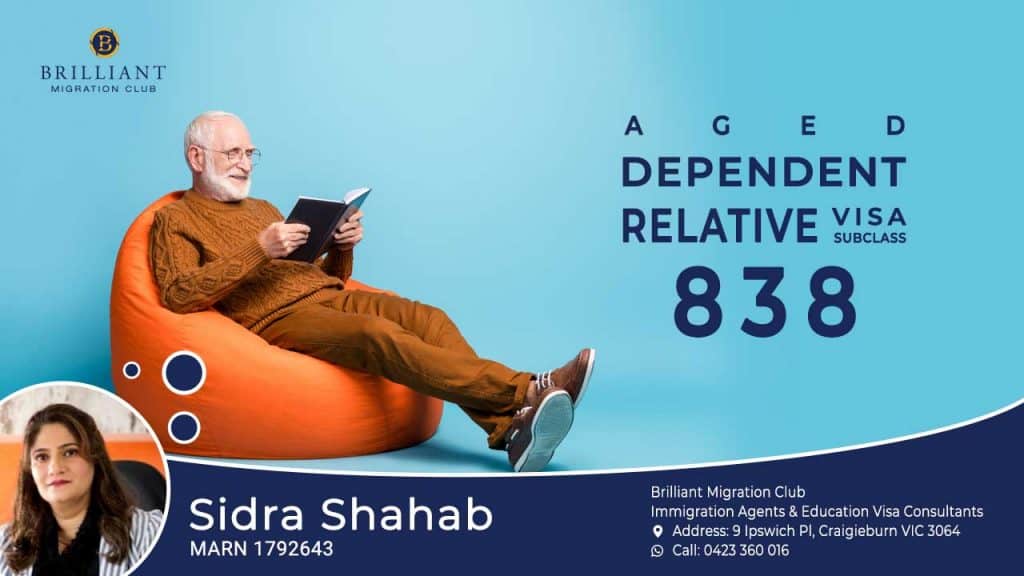 The aged dependent relative visa Subclass 838 onshore visa, just like Subclass 114, allows an eligible applicant to reside permanently in Australia, subject to complete dependence on an eligible sponsor who should be a close relative of the applicant.

However, contrary to Subclass 114 where the applicant can apply from outside Australia, He/she must be present in Australia at the time of application for a Subclass 838 onshore visa. After qualifying for permanent residence, the applicant can also apply for Australian citizenship after a certain duration.

As only a handful of applications of the particular subclass are processed each year, the visa issuance can take from one to few years, depending upon the number of applicants and transparency of the documents. Which means one must show a lot of patience when applying.

If you or one of your loved ones is going to apply for the Subclass 838 Visa, it’s crucial to know about the various conditions, documents, and requirements of the specified Subclass to make your long waiting fruitful.

This is because even the slightest inaccuracy or misunderstanding of the process can lead to rejection. To make sure nothing like this happens, let’s go through a brief overview of the complete process and its major requirements.

We hope clear your mind at the end of this helpful article:

The Subclass 838 onshore visa only stays valid if the applicant is:

Following is the eligibility criteria for both applicant and sponsor:

To stay eligible for a Subclass 838 onshore visa, the applicant must:

To stay eligible for sponsoring a relative on Subclass 838 visa, the sponsor must:

Following are the relationships that fall under MoHA

Note: Step equivalents of the aforementioned relatives are also eligible to sponsor the applicant.

As age-dependent Visas like Subclass 838 and Subclass 114 are meant for sponsoring very close relatives, solid evidence will be required from both sponsor and applicant to prove the relationship. Some of the documents that can be used for the purpose include:

If the aforementioned documents are lost due to some unfortunate event and cannot be recovered at the moment, the following documents can be used as alternative proof:

As the above-mentioned documents don’t concisely explain the relationship status, the applicant might need at least 2 or 3 of them to prove a valid family link. Moreover, each document should be congruent to the other one.

He/she is not in a marital or de facto relationship

As the Subclass 838 Onshore visa requires the applicant to be completely dependant on the sponsor, he/she must be single. The following documents can be used as evidence subject to different circumstances:

If these documents aren’t available due to some reason, the following can be used as an alternative:

This is one of the most crucial factors that play a pivotal role in visa issuance. Here, the applicant must provide solid evidence that he/she has been dependant on the sponsor for a reasonable amount of time, and will continue to do so due to a certain inability or other reasons.

The judgment will be based on the following factors:

Just like the Subclass 114 offshore visa, the Subclass 848 onshore also requires the applicant to have been dependent on the sponsor for a reasonable time and must back it up with solid evidence that supports the claim. There are three major sub-parts of dependency that play a major role in the acceptance or rejection of a visa.

Reliance extent means the “level of dependability” of the applicant on the sponsor. For someone to fully pass the dependability criteria, he/she must:

The applicant must show that he\she has been dependant on the sponsor for at least 3 years prior to application lodgement. However, this condition can be softened subject to certain conditions. For example, if the applicant’s spouse has been receiving money from the sponsor and now he or she’s passed away, the applicant can provide previous transaction history along with the death certificate of the deceased partner.

The applicant must be dependent on the sponsor at the time of application lodgement and at the time of visa issuance. The concerned department can ask for evidence in certain cases. So it’s better to keep them ready.

When is a sponsor considered settled?

The sponsor is considered a settled Australian citizen if he/she:

Evidence required from the sponsor.

The following pieces of evidence can be asked for if the sponsor has remained absent for more than 4-months within 2-years duration prior to lodgement of application:

1.  If the sponsor is in Australia at the time of application

2. If the sponsor is outside Australia at the time of application

To avoid visa rejection, the applicant must follow the below-given checklist. This will ensure that the visa is processed in due time, with increased chances of application acceptance.

The age-dependent relative subclass 838 onshore visas are given on a first come first serve basis. Moreover, only a few of these visas are processed, so it is going to take a year (or a few) for the visas to be processed. The waiting period can be even more if:

For further information about the Age-Dependent Subclass 114 visa, kindly visit the official website of the Australian Department of Home Affairs. If you are an applicant, talk to your concerned agent before, and during the application process for a smooth and less stressful experience.

All About Partner Visa